“Getting out of Dallas was the easy part.”

What if JFK survived his assassination attempt on November 22, 1963? This is the question Bryce Zabel attempts to answer in his novel, Surrounded By Enemies.

As noted on its Amazon page, “President John F. Kennedy has lived through the ambush in Dealey Plaza. America holds its collective breath, seeing its president nearly executed in broad daylight. But as the country marches on, the office of the President finds itself under a much more insidious type of fire. Political scandal, an endless war, and a country coming apart at the seams take the 1960’s in a terrifying new direction, and both John and his attorney-general brother, Bobby, struggle to stay ahead of their enemies, political and otherwise, and steer America toward a greater future.”

This version of alternate history is based on plausible outcomes and actions taken had JFK survived that day and continued on as President. It is a fascinating read trying to answer one of the more famous “what if?” questions. 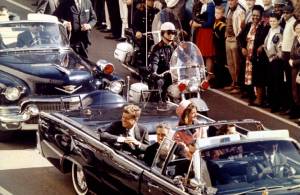 As JFK survives the attempt on his life, the search is on to find out who did it which consumes the Kennedy Administration. Americans, not unlike after September 11, 2001, are strongly supportive and encouraging at first but then this slowly evaporates or turns into anger as actions are taken in the search for the killers and scores are settled turning public opinion against the once-popular President.

Some of the more interesting aspects of this book focus on the other characters, mainly the political fortunes of Vice President Lyndon Johnson who does not come out of this event favourably. Some of these outcomes of this alternate timeline we can guess – the escalation in Vietnam does not occur. The legacy of key legislation after the assassination is mixed. The legacy of JFK is very different in the alternate timeline than it is today. While in 2020 it remains revered, in the book it is divisive with no middle ground – people either revere the man or loathe him. The grand imagery of Camelot, and a youthful President, is not a factor in the legacy.

If there was one aspect of the book I would have appreciated more examination in it would be JFK’s post-Presidency life. Without going into details to spoil the book, JFK ends up becoming an elder statesmen, of sorts, and the transition to this role is a bit light beyond one major event, but I can appreciate why because it would require too much detail to keep plausible. Another area that the book does not shine a light on for too long is the relationship between JFK and Jackie Kennedy and his family. There are some snippets but, again, to go any further would be too difficult to remain plausible.

If you are interested in “what if?” answers, and you have an affinity for JFK, this book is a great read. It is an easy read and provides great intrigue and a plausible way forward had JFK survived. Pick it up if you can.

Fascinating “what if?” scenario that remains an interesting and easy read. I just wish it would have explored a bit more in other areas.

Have you read the book? What did you think of it? Let me know in the comments section below.

My Review: GlenfiddichSMW Single Malt 12-Year Old Scotch (@glenfiddichdistillerygiftshop) - a good whisky to begin your journey!⁠⁠
Back in December there were rumours circulating that Rogers wanted to demolish the stadium and build a new stadium in another part of the city. SkyDome is only 30 years old. It seems premature to demolish it. I have some suggestions for renovating the iconic stadium instead of tearing it down and building a new stadium in #Toronto @bluejays.⁠⠀
With Remembrance Day coming up this Wednesday, I wanted to look back at my trip to London back in 2017 and visiting Vimy Ridge in France. We took the ferry over from Dover to Calais and stayed in a nice B&B in Albert, France. From there we drove to Vimy and visited the Canadian National Vimy Memorial. Click on the link in the bio to read about my experiencing visiting the memorial site. ⁠⠀
"Dinosaurs ruled the world." - Doug Smith⁠⠀
I have hinted at a few experiences within Boston that I have enjoyed, such as my visit to the JFK Presidential Museum and the tour of Fenway Park on its 100th anniversary, so it is time to look back on my trip to Boston back in 2012. Boston is one of the oldest cities in the United States and North America, and the history of the city is what drew me to visit. Click on the link in the bio to read more about my trip to Boston. ⁠⠀
Many people enjoy building on what has been done already and tinkering around the edges. The appeal of building something from scratch is something I enjoy. This captures my interest because it is so much fun to build things up. It takes a lot of patience and dedication (maybe a mistake or two along the way) but it can be worth it. Click on the link in the bio to read more about the appeal of building something up.⁠⠀
Loading Comments...
%d bloggers like this: